Basil – For us, this is a must-have in our kitchen. It goes well with other herbs, like rosemary or oregano. It is great for making pestos or as a part of a pizza topping.

Oregano – One of the most important herbs in Mediterranian cuisine. Healthwise, it is an antibacterial, anti-oxidant, nutrient-dense spice. It adds a wonderful aromatic flavor to all the dishes.

Rosemary – fragrant evergreen herb native to the Mediterranean. Its name means „sea dew“ which means that for it to grow only sea dew is needed. It can be used for cooking, health problems, body care…

Garlic powder is dehydrated ground garlic, either in flakes or a fine powder. We use it in soups, stews, for making plant-based cheese. We like fresh garlic even better.

Ground Ginger – Although fresh ginger is much better health-wise, ground ginger gives that spicy flavor to your foods and can also make a delicious tea for winter months.

Turmeric is a miracle spice, praised to be the most powerful herb on the planet. A number of studies have even reported that using curcumin (one of the compounds in turmeric) is more advantageous than certain prescription drugs. It will make your dishes taste delicious and give them a beautiful yellow color.

Bay leaves – Pleasantly aromatic bay or laurel leaf is one of the best-known culinary spices in use since the earliest times. Although fresh leaves can be used, dried are much better because the drying process removes their natural bitterness.

Cinnamon is one of the oldest spices in use. There are two different kinds, Ceylon and Chinese. Ceylon cinnamon has been hailed as the “true cinnamon” or the “real cinnamon”. It possesses outstanding health benefits especially for the diabetics and those challenged by obesity and high cholesterol issues and is about ten times more expensive but worth every penny. Chinese cinnamon might cause some health issues like liver and kidney damage from too much coumarin.

Cilantro or Coriander is also one of the world’s healthiest herbs. Seeds and leaves give the dishes light citrus flavor. Its health benefits include control of blood sugar, cholesterol, and free radical production.

Garam masala is the most common spice mix in India. It consists of pepper, cloves, cinnamon, nutmeg, cardamom, bay leaf, and cumin.

Cardamom is the world’s third-most expensive spice, surpassed in price per weight only by vanilla and saffron. It is native to India, Pakistan, Bangladesh, Bhutan, Indonesia, and Nepal. It has a sweet flavor similar to those of grapefruit and ginger.

Himalayan salt – Rock salt mined in the Himalayan region of Punjab in Pakistan. It is said that it contains 84 trace minerals and elements that are found in the human body. When consuming this salt, you are actually getting less sodium intake per serving than regular table salt. For cooking purposes, it is less salty which makes it able to control the saltiness of the dish better.

Smoked paprika – brings a deep, smoky aroma and flavor to everything. It is made from pimiento peppers that have been dried and smoked over an oak fire, then ground into a fine powder.

Sweet red paprika powder – paprika peppers are strongly associated with Hungarian cuisine. Paprika can range in flavor from mild and sweet to fiery hot and is used heavily in Eastern European cooking.

Cumin has a powerful, unique flavor that enhances dishes like roasted vegetables, chilies, Mexican dishes, curries, soups…It is a good source of iron, manganese, and other vitamins and minerals. It also helps digestion.

Parsley is the world’s most popular herb. It is widely used in European, Middle Eastern, and American cooking. There are two main varieties of parsley – curly leaf and flat-leaf. Because of its light scent and fresh taste, parsley can be used in anything from soups to sauces and vegetables.

Celery is an excellent source of antioxidants and beneficial enzymes. It is famous for its aromatic flavor. Celery leaves are typically used as a salad ingredient. Its seeds are used as a seasoning or dry spice in many dishes. Celery stalk and leaves are also considered a base ingredient in soups and stew dishes.

Caraway seeds are highly aromatic and have a distinctive earthy anise flavor. They are great for homemade bread, stews, and roasts.

Anise has a sweet, licorice flavor. Although star anise and anise seeds are botanically unrelated, they have nearly identical flavors. The flavor may be enhanced by gently toasting the seeds. It is being used in soups, sauces, bread, cakes, biscuits, herbal teas…

Lemongrass is widely used as a culinary herb in Asian cuisines and also as a medicinal herb in India. It has a subtle citrus flavor and can be dried and powdered, or used fresh. It is commonly used in teas, soups, and curries.

Cloves are the unopened pink flower buds of the evergreen clove tree and they provide warm, sweet and aromatic taste. It pairs well with cinnamon, allspice, vanilla, red wine and basil, as well as onion, citrus peel, star anise, or peppercorns.

Nutmeg is a delicate, slightly sweet spice that is widely used in cuisines around the world, including both Asian and western recipes. You can use it in hot beverages, baked goods, cream sauces… It has a number of health benefits and it is antibacterial.

Curry powder is a blend of many spices and comes in almost infinite varieties. The most common and advantageous ingredients of curry powder are turmeric, coriander, cardamom, cumin, sweet basil, and red pepper.

Thyme is packed with numerous health benefiting phytonutrients (plant-derived compounds), minerals and vitamins that are essential for overall wellness. It is widely used in Italian cooking and even more in French cuisine. When cooking with thyme be sure to add it early in the process so the oils and flavor have time to be released. This herb is great when used fresh, and goes well in many typical southern Italy pasta sauces. It is also a great complement for many vegetables, including tomatoes and roasted potatoes.

Chives blend nicely with almost any dish, and their bright green color makes a nice garnish. Try mixing them into a soft cashew cheese to get a delicious bread spread.
Saffron is one of the most expensive food on earth. The most classic use is rice dishes: risottos, pilafs, and paellas. A small pinch adds brilliant color, aroma, and flavor. For general cooking, it is best to add saffron early on in cooking so its flavor can infuse into the other ingredients.

Pepper, “king of spices”, has a long history of being used as a seasoning, a preservative, and even currency. By far the most frequently used spice, pepper adds an excellent depth of flavor to nearly any savory dish, and many sweet dishes as well. Black, white, and green peppercorns all come from the same vine. Because of its antibacterial properties, pepper is also used to preserve food. 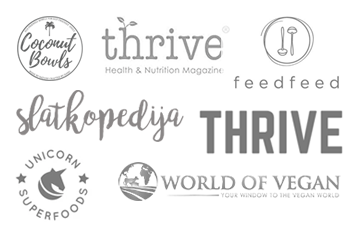